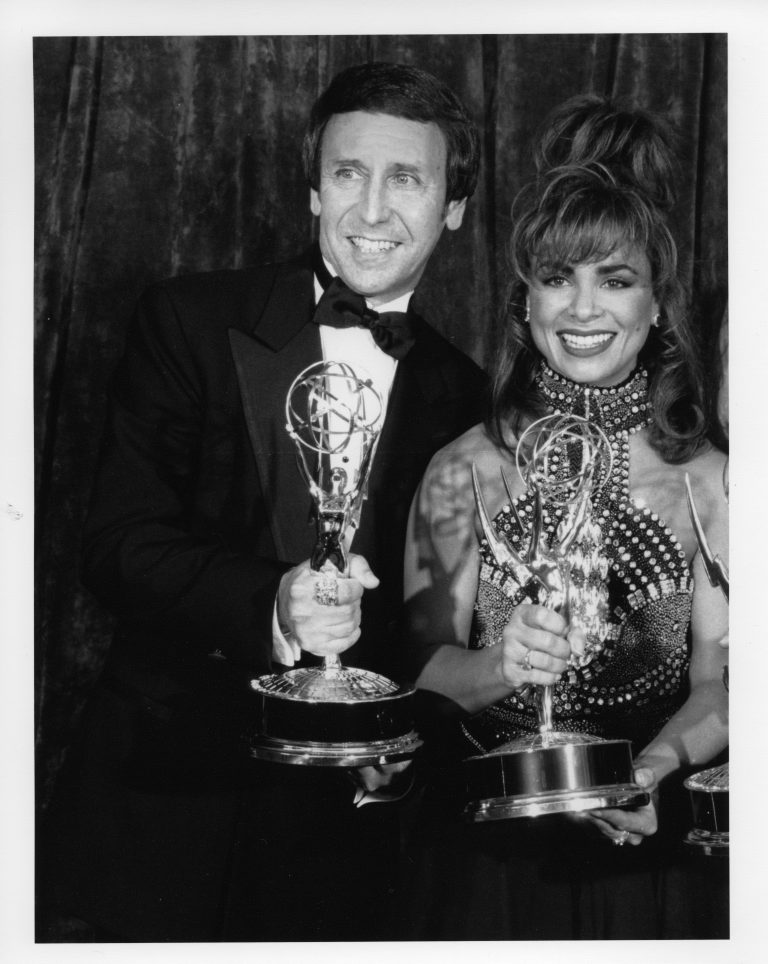 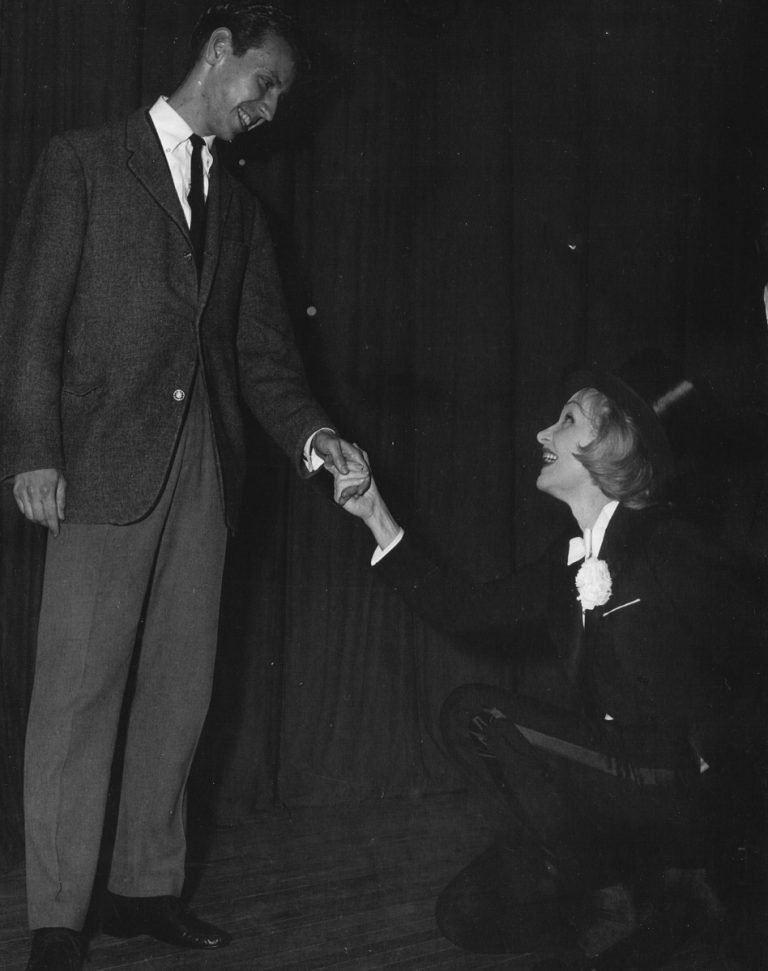 In a show of support for dance as an art form, Congress signed a bill in 1989 declaring May 25 National Tap Dance Day. (It’s also the birthday of one of the genre’s greatest contributors, Bill “Bojangles” Robinson.) The goal was to “preserve, promote, and celebrate” tap dancing as “a uniquely American art form.”

To honor tomorrow’s 24th National Tap Dance Day, we spoke with award-winning dancer, teacher, and choreographer Dean Barlow in his Burbank studio. Barlow won an Emmy in 1990 for his tap choreography on the American Music Awards and in 2004 received the Stanley Holden Award for Distinguished Teaching. His Emmy is shared with Paula Abdul, a student of Barlow’s since she was a child, and he choreographed tap routines for many of her music videos. During his performing career, he worked with some of the greatest Hollywood stars including Marlene Dietrich and Frank Sinatra. He now teaches stars like Seth MacFarlane and Helen Hunt, sometimes preparing them for performances but often just because they love dancing.

Barlow says he began working professionally at age 19 though he remembers performing as a child, portraying Eddie Cantor’s son in a televised comedy hour. “I was dressed like him. I came off of his knee and went into a tap number. It’s been so long, I forgot I was a child at one time,” Barlow laughs.

Barlow’s professional life centered around the stages and nightclubs of Las Vegas during what he calls “the tail end of its golden age.” Patrons could see Ray Bolger, Dorothy Dandridge, Frank Sinatra, Judy Garland, Red Skelton, Nat King Cole, and others—many of whom wanted Barlow for their opening act.

“If you were good, you could go from one club to another, one job to another,” Barlow says. “A star would see you and they would say ‘I want to hire you to do an opening number.’”

Barlow was one of three people on a bill with Eartha Kitt and was a featured dancer with Donald O’Connor and George Burns (where he shared a dressing room and painted Vegas red with Bobby Darin). On one of O’Connor’s television specials, Barlow provided the recorded tap sounds for the chorus. “There’s no live dancing [on film or television] most of the time with tap,” he explains. “It’s all prerecorded on a soundtrack, so you know there aren’t going to be mistakes.”

Sinatra once asked him to dance a tribute to Rosalind Russell (who had portrayed Auntie Mame in the film) during a private party in her honor at the Sands. “It was probably the biggest party they’ve ever had,” he said. “They closed the whole club down.”

Barlow refuses to name his favorite collaborator but he found George Burns “a very fascinating man.” Burns would be at the theatre when Barlow showed up early, and they spoke almost every day about show business.

A highlight of Barlow’s career was working with Marlene Dietrich at the Sahara in Tahoe. Dietrich built a number around Barlow and brought him on her European tour.

“She was probably the most incredible performer I’d ever seen,” he says. “She was such an attraction to the world, and of course she could perform. She could sing, she could dance, and every time she appeared, she brought out all the rest of the stars to see her.”

Barlow’s mother first put 5-year-old Dean in dance classes. “Every time I got to the dance studio, I had a pain in the stomach or a pain in my back, and I wasn’t able to dance,” he says. “And then I saw one of my neighbors tap dance, and I said that’s pretty cool, I want to do that!”

When asked what was so appealing to him about tap, he says, “It was a guy thing.” As for tap now, Barlow says, “I think it’s an every thing. But when you think of the [great] tap dancers, you’re first going to name a bunch of men. Not that there weren’t great women tap dancers like Eleanor Powell and Ann Miller, but when you think of tap dancing, the two names [you think of] are Fred [Astaire] and Gene [Kelly]. And of course my favorite Bill Robinson. I try to do all of his steps.”

While Barlow was too young to dance with Astaire or Kelly in their heyday, he did work for Kelly when the tap great was in his 80s. They met through the work Barlow did for Paula Abdul’s music videos including “Straight Up” and “Forever Your Girl.”

“Gene Kelly saw the choreography on ‘Opposites Attract,’ which was a cartoon, and it reminded him of Anchors Aweigh, [the film Kelly did with Jerry the Mouse], and he wanted to meet me,” says Barlow. He invited Barlow to his house to coach a young Patrick Dempsey for a musical that never came to pass. “So there I was, dancing in Gene Kelly’s foyer.”

Barlow says working with Abdul was “Intense and great. The work meant everything. Everything had to be just right. I worked very, very hard when I worked with Paula, but it was always fun.”

Not surprisingly, Barlow loves the classic tap dance. His personal style combines moves from clogging and step dancing while adding showmanship and class. “So much of tap dancing today, I love it, [but] it’s all pounding holes in to the floor in one place,” he says. “When you see Fred Astaire or Gene Kelly dance, they dance for the people. Today, dancers are dancing for dancers.”

Not only are the styles different, Barlow feels there aren’t as many opportunities for tappers. “Nightclubs in Vegas [offered] big money in those days,” he says, “but it’s evaporated today. There’s not a place for a lot of these dancers to work, and they’re fantastic.” Fortunately, there are some opportunities on Dancing With The Stars and So You Think You Can Dance.

That only makes National Tap Dance Day that much more important. Take a class at Barlow’s studio or one of the many others around Los Angeles. Let’s not forget, as the Congressional bill asserts, the “joyful and powerful aesthetic force” tap dancing provides.

“I’ve been dancing most of my life,” says Barlow. “That’s all I remember. That’s the only job I’ve ever had, and I’ve been very, very lucky to be able to make a living at it. It’s really a blessed life if you can do something you want to do.”